skip to main | skip to sidebar

On March 31, 2009 we opened up release 1.0 of our site to the world wide web. It was surely a proud moment for all of us at SmartCrowds who worked so hard towards it. If you haven't already, I urge you to check it out. Don't forget to leave the feedback at the bottom of the page in the feedback form.

OK, What are we all about you ask? Most communication today associated with brands and consumers is one - way. Brands blast the airwaves with commercials and adverts. The consumer has rants which he blogs about or posts on different fora. How do we close the loop? How we do we make the communication more interactive? BrandAdda is our answer to this problem. Here you can air your views regarding what you love/hate about something and the brand reps will listen to you.. and respond! You are absolutely nuts about Apple's 1984 Mac commercial? Post a youtube link and let the world know. Wanna hear what the twitter world is talking about Apple? Hear Hear.. There are lots of things you can do on BrandAdda. We genuinely hope that this will address the big gap between customers and companies today.

This release brings a lot of changes to the UI. Some features were taken out that seemed to be unused or confusing to the users. We added some features to make the whole experience much better for the user. Visually, I believe the site to be much more appealing than it was before.

For me personally this release meant some long nights and weekends I was working while my friends were enjoying themselves. But I feel happy I made those sacrifices, because the end product is so awesome that it really makes me proud. I personally believe we've now got a product that can really take off. What it needs is for the people out there to know about it. Would appreciate it if you can help the word spread. If you are a registered user at BrandAdda you can invite your friends by email and get extra points for it :)

Inspite of all the effort we put in, there might still be bugs and issues. Sorry for that. Please help us by reporting them on the feedback form at the bottom of the page.

Well.. there goes the baby into the big bad world. Let's see how she does :)

ps : The opinions here are my own. They have nothing to do with the company.

Posted by Anirudh at 8:46 AM No comments:

The mouse who wanted to fly

Mouse wanted to fly. That’s all he dreamed about - night and day. When he was small he read books. All the books he read about were about great birds. Birds who flew high in the sky. Birds who crossed whole forests in a single stroke of their wings. Birds whose wings flap came down as storm winds on the mere mortals below. He dreamed about being one of them. He longed to be up there. He wanted to be worshipped like he worshipped the great birds. The desire ate every cell in his body. For a while it was good. For he imagined that the day would come soon when he could fly. He was still small. There was time still.

Things started getting worse. Many attempts he made to fly. None succeeded. He tried and tried. But couldn’t fly. The mice no longer counted him as one of their own. The birds had hoped that he would fly one day like them. They too lost hope. And the mouse.. he started to understand - he would never fly. He didn’t have wings. God had not made him to fly. But he thought he could.. and that’s all he cared about. It’s not a nice feeling. A mere mouse doesn’t feel very sad when he can’t fly. But our mouse was no mere mouse. He wanted to fly. He dreamed about it night and day. There were times when he knew he could fly. He was crushed. What was his life worth now?

Email ThisBlogThis!Share to TwitterShare to FacebookShare to Pinterest
Labels: story 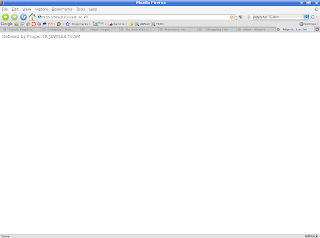 The official website of Cochin University of Science & Technology got defaced by crackers. I guess they're trying their best to restore it. The crackers call themselves "ProgenTR JAWNAX TEAM".
Posted by Anirudh at 10:55 PM 10 comments:

Why is there no broadband in India? :(

Happened to read this at Slashdot :

An anonymous reader notes that Comcast is offering a new 50-Mbps / 6-Mbps package for residential customers for $150, starting in Minneapolis-St. Paul and extending nationwide by mid-2010. The new service will use the DOCSIS 3.0 standard, which is nearing ratification. We've recently discussed Comcast's BitTorrent throttling and promise to quit it, and their low-quality 'HD' programming. How attractive will $150 for 50 Mbps be compared to Verizon's FiOS offerings?

This is crazy!!! And totally unfair! :( Here in India the fastest "broadband" that we can get is a 2Mbps ADSL connection that comes to around 500 rupees (excluding tax). And just compare prices. Makes my heart break :( I've heard that broadband services are better and cheaper (than in the US) in some other countries (Korea? Japan?).

I wish affordable Broadband comes to India. It isn't like there is no market here for proper broadband. The demand is there, the supply is absent.
Posted by Anirudh at 10:46 PM No comments:

The International Organization for Standardization(ISO) has approved Microsoft’s OOXML as a standard.

Lots of us in India were happy that BIS had decided to vote against OOXML. Short - lived happiness as it turns out.

Posted by Anirudh at 9:59 AM No comments:

Email ThisBlogThis!Share to TwitterShare to FacebookShare to Pinterest
Labels: technology

It's been a long time since I blogged. What made me come out of hibernation?

Demonoid, the popular BitTorrent tracker has been shut down. It says :

The CRIA threatened the company renting the servers to us, and because of this it is not possible to keep the site online. Sorry for the inconvenience and thanks for your understanding.

It's come up on Slashdot and Digg. CRIA is apparently -

The Canadian Recording Industry Association is a non-profit trade organization that was founded in 1964 to represent the interests of American companies that create, manufacture and market sound recordings in Canada. The organization is based in Toronto.

CRIA is governed by a board of directors who are elected annually by CRIA members. To be eligible for election a candidate for the board must be among the chief executive officers of member companies of the organization. Graham Henderson (Universal Music Canada) is the current president of the CRIA.

according to the Wikipedia article. There are subsections in the article on the 1st Demonoid shutdown and the second Demonoid shutdown. Vandal edits (technically they're not Vandal edits because policy says "Even harmful edits that are not explicitly made in bad faith are not considered vandalism. For example, adding a personal opinion to an article once is not vandalism — it's just not helpful, and should be removed or restated.") are already appearing in the Wikipedia :D ( examples 1 , 2 ).

My friend Arun recently blogged about Automounting filesystems in Linux from a Fedora perspective. For those of you who want an alternative method (especially Debian users), here goes...

I'll explain how I did it - it's much easier to understand from an example.

First of all, I used fdisk so I could know which were all the partitions in my system and what they were called.

Now take the first entry. That partition is called /dev/sda1 and is the C: drive on Windows. Now I use the mount command to mount the partition. Mounting means that I attach a physical device to a directory, so that the directory itself becomes the device. It's a concept that you get used to once you are familiar with all this. To mount the partition, I need a mount point. This is any directory that I create.

You can check if it has been mounted using the df command.

Now there's a file called /etc/fstab that comes in very handy. This mounting business is temporary. It gets "unmounted" after I shutdown. I would like to automatically mount it each time. I do that by modifying the /etc/fstab file. The /etc/fstab file keeps static information about the filesystems(refer $man fstab). Another file that comes in handy is /etc/mtab. This file keeps info about all the devices that have been mounted. After I mount /dev/sda1, an entry is made in /etc/mtab automatically.

Now I copy this line into my /etc/fstab, with some modifications.

Now each time the system boots, that drive will be mounted automatically.

Now, suppose I don't want it to be mounted now? I use unmount.

To disable the mounting of the paritition automatically, just remove that particular entry from /etc/fstab or uncomment it.

See no Evil, Hear no Evil

The Hindu is a respected newspaper in India. It carried a rather interesting report on its front page on December 1,2006. "A controversial judicial appointment", it said. The report notes :

New Delhi: The appointment of Justice Vijender Jain as Chief Justice of the Punjab and Haryana High Court took place under contentious circumstances. According to an appointment file noting by President A.P. J. Abdul Kalam, these included "divided opinion at the level of the [recommending Supreme Court] collegium"; a collegium that was expanded, in the first instance, from three to four members "in departure from" para 5.1 of the relevant Memorandum of Procedure; "dissenting" and "deprecatory" written remarks against the appointment by three Supreme Court judges; and reservations expressed by the President, who returned the file to the political Government for reconsideration.

However, these hurdles were fairly quickly overcome and the notification for Mr. Justice Jain's appointment came on November 27. He was sworn in as Chief Justice of the Punjab and Haryana High Court on November 28.

The report also comes with excerpts from the President's file on the appointment. This kind of stuff should've made it to the headlines of every newschannel and caught the attention of the media. The Parliament is in session and the opposition should've raised the issue. The only channel I get is Doordarshan and Doordarshan news. Nothing was mentioned in DD News. I do not know if other newspapers or newschannels have reported this. How come there is no noise on this issue?

Is it just me or is something happening behind the scenes that we're not aware of? Is there something wrong with the report or is someone preventing the media from reporting this? Can somebody please tell me???
Posted by Anirudh at 9:09 AM 3 comments:

Anirudh
I am the lonely crusader. I am in constant crusade against the system, not because I find anything wrong with it per se but because that is what I do. That is what I was born to do. I am a philopher. I spin theories that I use to justify my actions and prejudices. I analyse to the very extremes. I evaluate and enumerate. I do all this because this is what I do. No evil intended. I do not seek to harm any one. I seek to live in a self-absorbed world of my own creation. Correction : worlds of my own creation. I exist simultaneaously in these worlds the laws of which I write and over which I rule. I have no time for the ordinary world. I am lazy as lazy can be. There is nothing that can give me more pleasure than my computer with a very fast net connection. I have no interest or time for anything else. You cannot seperate me from my computer.